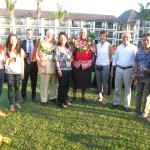 On June 3-7, 2013, Administrator Regina Bautista-Martin flew to Fiji as head of the Philippine delegation which attended three important events there namely, the 22nd ISO International Seminar, 41st MECAS Meeting and the 43rdSession of the International Sugar Council. Together with her in the official trip are SRA’s Jose Rojo G. Alisla and Francisco Varua of the PSMA.

No less than Fijian Premiere Commodore Josaia Voreqe Bainimarama rendered the welcome remarks before the participants to the five-day event. He mentioned their appeal to the European Commission to extend the sugar program which gives preferential tariffs to nations like Fiji, which exports to the EU.

For the first stop of the series of events which was the ISO International seminar, eight interesting topics were presented, majority of which highlighted the current situation of the Fijian sugar industry, like the government’s strategic plans to address the steady decline in production that includes providing subsidies and support. Strategies to achieve the Fijian sugar industry’s goals in 2020 were also discussed, which is somewhat similar to the Philippines’ basic product diversification scheme. Interestingly, some of the programs discussed are already being implemented in the Philippines at present.

Trade related issues were also touched, in which countries with preferential tariffs to the EU are threatened by its possible scrapping in 2016 although negotiations are still being done for its extension. Regional market prospects were cited as well since there is a growing demand for sugar in Asia at this point. It’s good that sugar-producing countries in the region expressed their readiness to address the present and future demands. In the said seminar, the good relationship between Fiji and India was revealed and it has grown stronger especially in the areas of technology sharing, investments and other aspects.

The MECAS (Market Evaluation Consumption and Statistics Committee) meeting was the group’s next stop. Topics tackled were: ‘The Market Situation and Outlook for Crop Year 2012-13”; “The Future Role of Sub-Saharan Africa in Sugar and Sugar Crop Renewable Energy”; “International Surveys on Prices of Sugar/Sugar Beet and Competing Crops” and “Climate Change and Sugar Crops.”

The last leg of the group’s trip was at the 43rd Session of the International Sugar Council where one major topic discussed was the process of choosing the next ISO Executive Director with the retirement of Mr. Peter Baron. After some deliberation, the selection and voting process was approved. The final voting will take place in October through a special meeting to be staged in London.